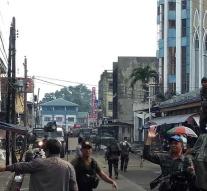 manila - On the Philippine island of Jolo at least nineteen people were killed when two bombs went off shortly after each other at a Catholic church. 48 others were injured, the Filipino...

According to the authorities, the first bomb went off in the church where a service was being held at that time. When soldiers had rushed to the incident, another improvised bomb exploded. Among the victims are several soldiers.

Who is behind the attack is not known. In the southwest of the Philippines, including at Jolo, militant Muslims are active. They fight for independence within the predominantly Catholic country.