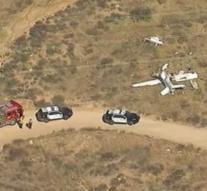 los angeles - At least four people were killed when a small plane crashed in California. Nobody survived the accident, reports local media.

The plane crashed into hilly territory a few kilometers from Agua Dulce Air Park. It is unclear whether the aircraft had just left or was on its way to the local airport near Los Angeles. 'The plane, a Cirrus, crashed under unknown circumstances,' said a spokesperson for aviation authority FAA.

Rescue workers found the bodies of three adults and a child. The identity of the victims has not yet been made known.