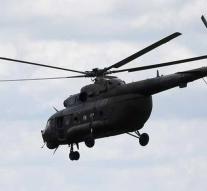 bogota - A helicopter crash in northern Colombia has killed ten people. On board of the defense helicopter, besides eight soldiers, two civilians were also present. The aircraft was on its way to Caucasia, where the occupants wanted to carry out an inspection at a warehouse of the army.

The Colombian commander of the air department of the army said that as of yet an accident is assumed. 'It is under investigation,' said General Juan Vicente Trujillo, who for the time being excludes a rebel attack. Soldiers are present at the scene of the disaster to store the bodies.

ELN fighters are active in the north of Colombia, with which until recently the government had a cease-fire. Since the file ended last week, the violence in the region has flared up again.