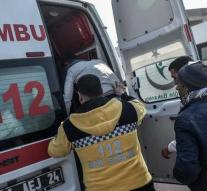 ankara - Due to a collision between a passenger bus and a truck, thirteen people were killed in Turkey. At least twenty people were injured, according to Turkish media.

The accident happened Tuesday morning in the province of Çorum. The bus was on its way from Istanbul to Tokat when the vehicle collided with the truck and caught fire. The truck was parked on the emergency lane.

The cause of the accident is not clear.