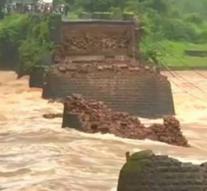 new delhi - Several people were killed in India on Thursday when a pedestrian bridge over the Zuari River yielded. According to the police, dozens of people had gathered on the construction in the state of Goa because a woman had committed suicide.

According to witnesses and the police, the bridge could not bear the weight of many spectators. 'An old metal bridge over the river has collapsed. There were about 40 people gathered, 'said a local police chief. 'The total number of victims is not yet known. '

A policeman said that fifteen people were taken to hospital.