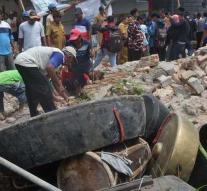 cirebon - At least seven people died on the Indonesian island of Java on Monday after an old building collapsed and the rubble fell on a music room where students were taught gamelan music.

Among the dead are six high school students of thirteen and fourteen years old and their 48-year-old music teacher. A student was injured. The students were practicing for a farewell concert at school.

In the building that collapsed near the city of Cirebon on West Java, according to the Jakarta Post, local delicacies were produced.