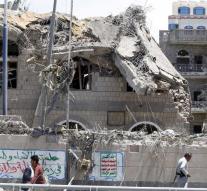 sanaa - At least six people were killed by air attacks on the presidential palace in the Yemeni capital, Sanaa. The bombing was carried out by the military coalition led by Saudi Arabia. According to medical workers and eyewitnesses, 30 people were injured.

According to reports, a meeting of Houthi rebels would have taken place shortly before the attacks in the building. The palace of the ousted President Abd-Rabbu Mansour Hadi is in the hands of the rebels. Hadi is currently in exile in the Saudi kingdom.

The alliance, led by Saudi Arabia, supports the internationally recognized government of Yemen and has been conducting attacks on the Houthi rebels for more than three years. The insurgents control large parts of the north of the country and the capital Sanaa. Because of the bombing, many civilians are killed, but the rebels do not weaken.

Peace talks seem far away at the moment. The humanitarian situation in the country ravaged by the civil war, on the other hand, is devastating. Millions of people are hungry or ill.