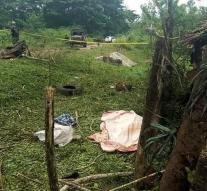 manila - The south of the Philippines has been startled by two attacks. In a village in the province of Sultan Kudarat, three soldiers were killed by an explosion. Not far from there, in the city of Isulan, a home-made bomb, hidden under a motorcycle, was detonated before a day in the local media.

The authorities reported that a 52-year-old woman did not survive. In addition, more than 30 injured. Other sources spoke of thirteen deaths. It was busy on the streets Tuesday through the annual festival.

The southern island of Mindanao has been terrorized for years by Islamic and Maoist extremists. The responsibility for the attacks has not yet been claimed.