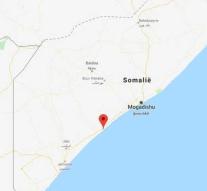 mogadishu - At least five people were killed by a bomb attack during a football match in the port city of Barawe in the southeast of Somalia. There were also dozens of injured.

The police said that all dead and wounded are spectators of the game. The authorities suspect that al-Shabaab, a terror movement linked to al-Qaeda, is behind the attack. The terrorist group would have wanted to meet government officials, but they had not yet reached the game when the bomb exploded.