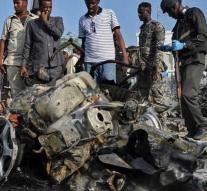 mogadishu - A suicide attack has cost the lives of three people in the Somali capital Mogadishu. The car bomb exploded near the parliament and the Ministry of the Interior.

According to a police officer, the explosive went off at a heavily guarded checkpoint. A photographer saw several destroyed vehicles. The head of the ambulance service in the city said that three victims were killed. Someone was also injured.

Terror organization al-Shabaab has claimed responsibility for the attack. 'We are behind the attack on the checkpoint that monitors access to the presidential palace, the parliament and the ministry of the interior of the apostate government,' said a spokesman, who claimed that thirteen soldiers were killed.

It is the second time in a few days that the city is startled by an attack. On Thursday, for example, fourteen more were killed by an explosion at a hotel. That attack has also been claimed by al-Shabaab.