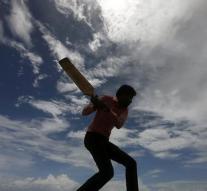 cabul - Certainly two people were killed by a suicide attack in the Afghan capital Kabul.

The assailant blew at a checkpoint outside the cricket stadium in the Afghan capital, saying security sources against news transmitter TOLOnews.

In the stadium, a match was taking place at the time of the attack. The spectators and players remained unharmed according to the authorities. According to sources, the two victims are members of the security forces.