Home / World / Kill by attack IS at Palmyra 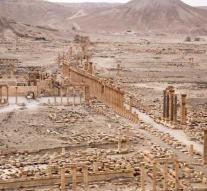 amman - At least 30 Syrian soldiers and Iran-backed militias have been killed in an attack by Islamic State (IS) fighters at a military post. The attack was at the ancient city of Palmyra in the east of Syria.

Various suicides blew themselves up. The fighters also used armored vehicles. The attack is one day after government troops had expelled the extremists from their last stronghold south of Damascus after weeks of continuous bombing.

IS has held the historic city of Palmyra twice. In addition, the extremists destroyed very valuable archaeological treasures.