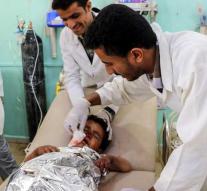 sanaa - An air attack on a school bus has killed at least 39 people in Yemen. Dozens of people were also injured, reports the rebel-controlled Ministry of Health. Many of the victims would be children.

The International Committee of the Red Cross (ICRC) confirms that a bus with children has been bombarded. After that, dozens of people killed and wounded were brought into a hospital. The ICRC emphasizes that warring parties are obliged to protect civilians.

Local residents say that the bus brought children to the summer school. The ministry holds the international coalition led by Saudi Arabia responsible for the attack. That coalition dominates the airspace over Yemen, where it fights against Houthi insurgents.