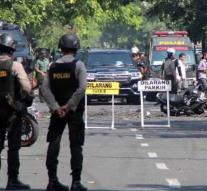 jakarta - At three churches in the Indonesian city of Surabaya, bombs exploded on Sunday morning. According to the police, these are suicide attacks. At least six people were killed and at least 35 were injured, including two police officers. At a fourth church, the police could defuse a bomb.

According to the Indonesian intelligence service, IS-inspired terrorist group Jemaah Ansharut Daulah is behind the attacks. A spokesperson for the intelligence service said on television that the attacks are probably related to an uprising of Muslim prisoners in Depok, West Java, last week. This involved six deaths.

The bombs went off around 7:30 am local time, when the morning Mass was in progress in the churches. Local television stations showed images of debris and injuries that were carried away. Surabaya is the capital of East Java and the second city of Indonesia. Many Christians live in the city.

Muslim extremists have repeatedly attacked Christians in recent years. In February, the police in Sleman, near Yogyakarta, shot a man who attacked church visitors with a sword.