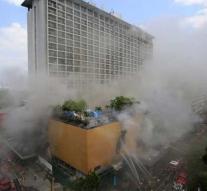 manila - Because of a fire in a large tourist hotel in the Philippine capital Manila, at least four people were killed. Six others were injured. In addition, there are at least nineteen people trapped in the building, the authorities said Sunday.

The fire department assumes that the fire broke out during renovation work.

The 350-room Waterfront Manila Pavilion Hotel is located in the tourist district Ermita of Manila. The building dates from 1968 and has undergone a thorough renovation since last year. Exactly how many people were in the building was still unclear. Rescue workers only said that in addition to the enclosed people, everyone was brought to safety.

Those who are still in the hotel are alive and are in constant contact with the rescue workers, a spokesman said. They are looking for a way to get them out.