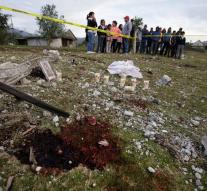 mexico - Certainly fourteen people were killed in Mexico after fireworks that were stored in a house exploded in the night of Monday on Tuesday (local time). During the explosion, thirty were also injured, reports the authorities Tuesday.

The dead are five children and nine adults. The blast occurred in the place of San Isidro Chilchotla. The fireworks were stored there in anticipation of a big party that would be held next week.

According to witnesses, the explosion was caused by fireworks close to the house. In addition, a projectile would have flown the house that left the stored fireworks.