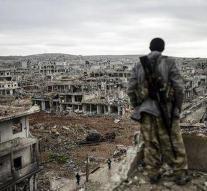 The explosives ended at a restaurant and a market in Rakban camp, where about eighty thousand refugees stranded. In addition, an unknown number of people were injured.

It is still unknown who is responsible for the attack in the camp, which is close to Jordan and Iraq.