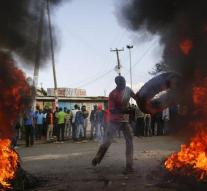 isiolo - A gang on Wednesday in the Kenyan city of Isiolo was wounded with a knife knife invoking a bureau where the votes of the presidential election of Tuesday were counted. An election official of the ruling Jubilee party came alive. The police shot two attackers dead.

Elsewhere in the country, the polls and the 'day after' are according to the authorities. There were wednesday demonstrations in Nairobi and in western Kenya. Local media reported that in a slum of the capital there were certainly two and possibly four protesters killed.

The Kenyan electoral council was accused of opposition leader Raila Odinga that there was tampering with the computer system and that the website was hacked to help president Uhuru Kenyatta to victory. After Wednesday's 97th anniversary of the vote, Kenyatta was still well-spaced: 54.3 against 44.8 percent. The official results are expected in the coming days.