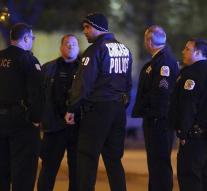 chicago - In a new outbreak of violence between criminal gangs in the American city of Chicago, Sunday night (local time) fell two dead and eight injured when suddenly a detention service of a deceased gangster was shot.

A police spokesman reported on Monday to CNN news channel. Two unknown men emerged from a side street and opened the fire to the attendants.

The police have not arrested anyone yet, but tells who is behind the attack. 'We have a good idea of ​​the conflict between these groups and know where to look,' said a spokesman.

The police say that the vast majority of the shooting incidents in the city had to do with criminal gangs. Chicago is the third city in the US and has been struggling with violence for years. Last year, nearly eight hundred people were killed, the highest in nearly twenty years.