Home / World / Kill and wounded by emergency weather in Asia 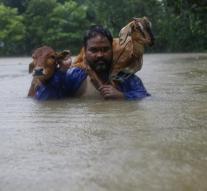 kathmandu - In Nepal, thirty people have died by emergency weather. Thousands of people lost their house.

Many places are closed from the outside world and bridges and dams in the country are damaged, according to the Nepalese Interior Minister.

China is also suffering from extreme weather. Thunderstorms raged across the country, so hundreds of flights had to be canceled at Beijing's busy international airport. Local authorities warn of thunderstorms, winds and heavy rainfall. Especially in the area that was already hit by a severe earthquake earlier this week, the weather can lead to landslides and floods.

In the autonomous Chinese region of Inner Mongolia, a tornado killed five people. Fifty others were injured.