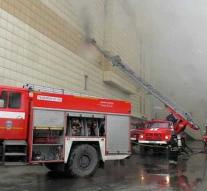 moscow - At least twelve people were killed by a fire in a shopping center in the city of Kemerovo in Siberia. According to local authorities, 69 people are missing.

The cause of the fire in the complex is not known. In the center, apart from shops, among other things, cinemas and restaurants are located. According to local media, more than a hundred people have been evacuated from the complex.

Kemerovo is located in an area where coal is extracted about 3600 kilometers east of Moscow.