Home / World / Kill and disappear in Japan due to extreme weather 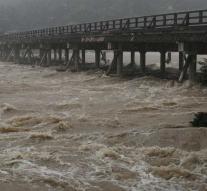 tokio - In Japan, two people died as a result of extreme rain showers. Hundreds of thousands of inhabitants in the west and middle of the country have been evacuated because of the rainfall rivers flood and there is a danger of landslides

According to the Japanese meteorological service, there is 'historical rainfall'. The service warns for even more rainfall until Sunday. On a part of the main island of Honshu, twice as much rain had fallen on Friday morning as normal in the entire month of July.

One person died when he had been transported through the water into a drainpipe. An elderly woman died when she was overthrown by the wind. Several people are still missing, including a child.

Dozens of people were injured, four of whom were serious, reported the emergency response service. Some people were buried under a landslide. Rescue workers try to dig them out.

Around 168,000 people had to leave their homes because of the danger of landslides and floods. The emergency response service has advised another 1.2 million people to leave the area. This also applies to residents of the former capital Kyoto. There, authorities have closed bridges and promenades along the rivers.