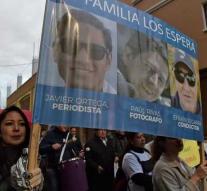 bogota - Two Ecuadorian journalists who were kidnapped with their driver are all three dead. Ecuadorian President Lenin Moreno said that Friday.

Reporter Javier Ortega, photographer Paul Rivas and director Efrain Segarra disappeared at the end of last month in the border area. The three would have fallen into the hands of the Oliver Sinisterra Front, which consists of former FARC fighters. How they got to their end is not known.

It is not the first time that foreign journalists have been kidnapped by Colombian guerrillas. The Dutch program maker Derk Bolt and cameraman Eugenio Follender fell into the hands of the ELN last year. They were released after about a week.