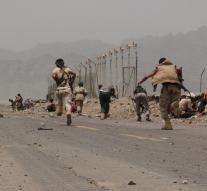 - An American who was kidnapped by Houthi rebels in Yemen, is deceased. It has informed the US State Department Tuesday.

The man was taken along with a fellow countryman on arrival in the capital Sanaa earlier this month. They came from Djibouti and worked for a company that manages the UN shelters.

How the American came to an end is not known. It is also unclear why the two were taken by the rebels.