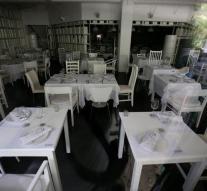 - Ivan Guzman is indeed one of the people who has been kidnapped from a restaurant in the resort of Puerto Vallarta. The rumors went about it, have been confirmed by the authorities. Ivan Guzman is a son from the first marriage of drug lord Joaquín Guzmán, alias El Chapo. It was long before it became clear whether the son was really the kidnapped victims, as in the establishment of false identity documents have been found.

According to local media, it continues to be a cousin of the drug lord. The men would have been present in the restaurant to celebrate a bachelor party.

Eight armed men abducted Monday several members of the notorious Sinaloa drug cartel in the restaurant in the center of Puerto Vallarta.

Tourist resort of Puerto Vallarta, located on the Pacific Ocean, is the scope of the Jalisco New Generation Cartel. This gang is becoming more powerful in recent years.