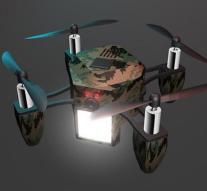 - Crowdfunding Site Kickstarter, a British journalist hired to investigate the collapse of the failed mini- drone project Zano. Although the project more than three million euro managed to pick up, it never got off the ground.

The more than 12,000 investors of the project lose their money. Earlier this week they received a mail from Kickstarter than tech journalist Mark Harris has been appointed to investigate what happened to the money and how it could go so wrong. Will also examine the role of Kickstarter itself.It is the first time that Kickstarter research has failed to do a project. In specific terms also state that it is not required here.Zano was the largest European Kickstarter project to date. The aim was to develop an autonomous intelligent mini-drone. The first copies were shipped, failed to meet the pledge made.Last month, the company behind the drone, torquing Group, announced that the target would not be achieved and that the activities were discontinued.Kickstarter hopes that future projects of the mistakes can learn in Zano project. " Transparency about the ups and downs of the creative process helps all of us to build a more creative world. "
NEW