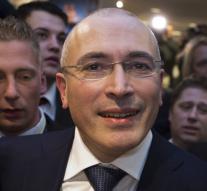 london - Mikhail Khodorkovsky intends to seek asylum in Britain. 'I consider that highly, because Putin sees me as a serious threat,' said the former owner of Yukos oil company told the BBC. He has recently sharply criticized President Vladimir Putin and the way he leads Russia.

Khodorkovsky will stay for a few years abroad, especially Switzerland, since he was released early in 2013 from a Russian prison. He sat there a long prison sentences for tax evasion and fraud. The former richest man in Russia has always maintained that the charges against him were unfounded and intended primarily to punish him for his criticism of the Kremlin.

,, I am convinced that there is a completely different wind is blowing in a decade in Russia. I hope an important role to play in , said Khodorkovsky told the BBC.

Against him was recently in Russia issued a new arrest warrant in an old case. He allegedly ordered the murder of a Siberian mayor in 1998. Khodorkovsky has already been accused of it, but was not prosecuted because there was no proof. An investigating authority would now surely have found evidence. Khodorkovsky has always denied any involvement in the murder.