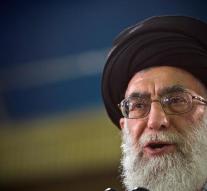 teheran - Ayatollah Ali Khamenei, the highest spiritual leader in Iran, labeled members of the royal family of Saudi Arabia as 'mafkezen' and 'dairy cows for the Americans' on Saturday. 'Those idiots believe they can acquire friendship with an opponent of Islam,' he said, according to the national press agency Fars.

Khamenei referred to his $ 100 billion weapon orders that Saudi Arabia did at American companies last week when President Donald Trump visited Riyadh. Sunni Saudi Arabia and Shiyan Iran are the main powers in the conflicting Middle East and sworn enemies.