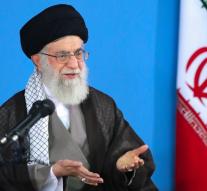 tehran - Iranian spiritual leader Ali Khamenei approve the atom treaty his country with six world powers and the European Union well. He has instructed the Convention to perform under some conditions. That is on the website of the main ayatollah.

The site also contains a letter from Khamenei to President Hassan Rouhani. It states that the United States and the European Union should make clear that the economic sanctions against Iran are lifted.