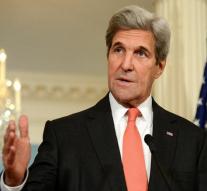 - Russian and Syrian actions such as the bombing of screaming hospitals in Syria for an investigation into war crimes, the US Secretary of State John Kerry said Friday.

'Last night the regime has again attacked a hospital, where twenty people were slain and hundreds were injured,' said Kerry. 'Russia and the regime the world over a statement owe why they repeatedly hit hospitals and medical facilities, and women and children. '

According to MSF are, since July been at least 23 attacks on hospitals in the rebel-controlled east of the city of Aleppo. The two main surgical hospitals were each hit five times and it therefore had to close its doors, says the medical humanitarian organization.