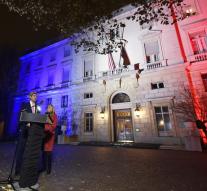 - US Secretary of State John Kerry has arrived in Paris Monday. With his visit, he will express support France after the attacks on Friday night which cost the lives of 129 people.

Kerry said " shoulder to shoulder " to stand with France in the determination to defeat the militants of Islamic State. He spoke after arriving in Paris to pay his respects to the victims of the massacre at several restaurants, a café, theater and football stadium that had been targeted by terrorists. Tuesday, Kerry will meet with President Hollande.

The American minister came from Turkey where he had attended the G20 summit. He went straight to the US embassy in central Paris and pressed a switch in which the exterior of the building in blue, white and red light turned, the colors of the French flag. " No one should doubt that the light still shines in the City of Light ", he said. " Paris has even darker moments known and has overcome it then. "