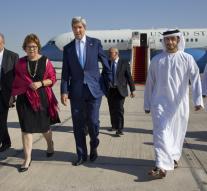 - US Secretary of State John Kerry on Monday in Abu Dhabi for talks with top officials from the United Arab Emirates (UAE) and Saudi Arabia across Syria. The goal is to find ways to keep the opposition groups in Syria to get in line for a conference next month in Saudi Arabia.

Saudi Arabia, Iran, Turkey and the five permanent members of the UN Security Council (the United States, Britain, France, Russia and China) met earlier this month in Vienna on the issue of Syria.