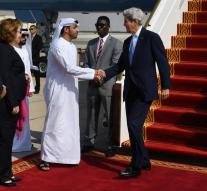 - The warring parties in Yemen have agreed on a truce. US Secretary of State John Kerry said Tuesday that a by Saudi Arabia-led alliance and Iranian-backed Houthis pledged to lay down their weapons as of Thursday.

According to Kerry, who is traveling in the Middle East, the warring parties have also agreed to work on a government of national unity. End would such a government to be formed this year.

The conflict in Yemen broke out when Houthi rebels in March 2015 captured the capital Sanaa and President Abd-Rabbu Mansour Hadi chased. Saudi Arabia and its allies in the Gulf shots to help Hadi, to prevent Iran could increase its influence over the Shiite Houthi rebels.