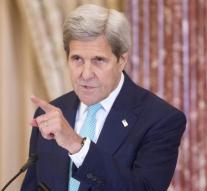 - US Secretary of State John Kerry on Tuesday met with the Foreign Minister of Saudi Arabia, Adel al-Jubeir. The two talked about the importance of curbing Islamic State.

Saudi Arabia was Monday, a day before the end of Ramadan, rocked by bombings. A suicide attack took place at the headquarters of the security service for the main mosque in Medina. In addition to the perpetrator four guards were killed.

In the conversation between Kerry and Al-Jubeir came the situations in Syria, Libya, Yemen and the conflict between Israel and Palestine discussed.