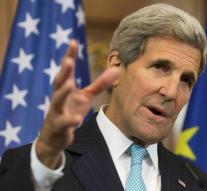 - US Secretary of State John Kerry will talk with Palestinian and Israeli leaders in an attempt to stem the unrest in the Middle East . He said Sunday in Paris .

He will next week in Germany consult with Israeli President Benjamin Netanyahu than in that country is visiting. Later, following a meeting with Palestinian leader Mahmoud Abbas.

That last call will take place somewhere in the Middle East. It's been over two weeks of unrest in the area by disagreements over the Temple Mount in Jerusalem.