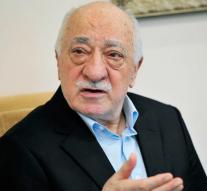 brussels - The United States has not received a formal request for the extradition of Fethullah Gulen. That said Foreign Minister John Kerry on Monday in Brussels.

Turkish President Recep Tayyip Erdogan has said publicly that he wants Washington his rival, whom he suspects behind the failed staatsgreepte, extradite. According to Kerry, however official weigh in for and that he has since made clear his Turkish counterpart Mevlut Cavusoglu, he said.

The US will do nothing to stop a legal proceeding.


Gülen denies having been involved in the attempted coup and suggests that Erdogan's behind itself to increase its power.