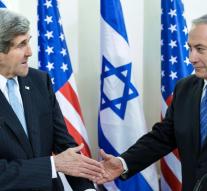 - US Secretary of State John Kerry will next week meet with Israeli Prime Minister Benjamin Netanyahu in Germany . They will discuss the recent wave of violence between Israel and the Palestinians in which 39 people have been slain , said the Israeli ambassador in Washington Friday .

Kerry, who plans to quickly move to the Middle East to try to contain the violence, was Friday heading to Europe.

A spokesman for German Chancellor Angela Merkel said earlier Friday that Netanyahu Wednesday comes to Germany for talks with her ​​about the security situation in Israel and the Middle East.