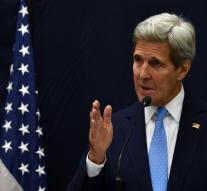 - US Secretary of State John Kerry is "cautiously optimistic" vote that tensions between Israelis and Palestinians can be quickly reduced. Kerry held Thursday that feeling about a conversation he had in Berlin with Israeli Prime Minister Benjamin Netanyahu.

" If the parties want to try to leave the situation de-escalation, and I believe they want to, there are several choices ", said Kerry. Since early October came nine Israelis were killed after they were attacked by Palestinians. In contrast, the death of 48 Palestinians, including 24 attackers.