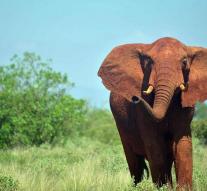 nairobi - Kenya on Thursday presented an ambitious plan through reforestation and planting of useful plants to regain a green appearance. In the period to 2030, 5.1 million hectares will be returned to nature, an area the size of Costa Rica.

The government has this transformation of the landscape decided to bind to fight climate change, poverty and hunger.,, This project is the most coherent and systematic effort to restore the destroyed forests and other green areas and preserve biodiversity, 'said Environment Minister Judy Wakhungu. Kenya has been hit hard by illegal colonization of nature and the felling of trees for charcoal production.

The plan now launched is part of the 'Bonn Challenge' in 2011, a gigantic environmental project for Africa. Kenya is the thirteenth country participating.,, A big step forward, '' Wanjira Maathai was delighted. She is the daughter of Nobel Prize winner Wangari Maathai and President of the Green Belt Movement, which has already planted 51 million trees since its founding by her mother in 1977.