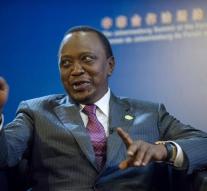 - President Uhuru Kenyatta of Kenya puts so many visits that his subjects mocked him as a foreign head of state calling Kenya every now and then. The agenda of the president in recent days : a summit in South Africa, the climate conference in Paris and a Commonwealth conference in Malta. In a few days he is expected in Rwanda.

The Kenyan newspaper The Daily Nation recently reported that Kenyatta since taking office in 2013 has made all 43 of working and state visits. By comparison, its predecessor Mwai Kibaki was ten years in power and was at that time 33 times for the country on the road.In social media cite many Kenyans working methods of their president wasteful. A spokesman for Uhuru Kenyatta called the cost of travel, however, " nothing compared to the yield. As the president of South Africa took a loan from the Chinese, the equivalent of 1.4 billion euros with.
NEW