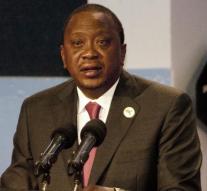 - Kenyan President Uhuru Kenyatta on Monday signed the documents allowing the death penalty for convicted felons is commuted to life imprisonment. According to the national media were in the African country in 2747 criminals, including 92 women, in detention awaiting their execution. They may now leave death row, but basically stay in prison until their death.

Kenyatta also made use of the constitutional right to an act of mercy and issued a general amnesty for 102 long-term prisoners. They are prematurely released.

Amnesty International welcomed the decision of the president. ' This brings Kenya closer to the growing community of countries that have abolished this cruel and inhumane punishment. Now, they still have not put more on the death penalty in the future, '' said Muthoni Wanyeki, director for East Africa.