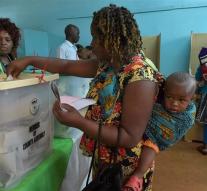 nairobi - At Kenyan polling stations, baby crests are being labeled Tuesday to prevent children from being temporarily rented to predators, reports Reuters. On the election day, hundreds of people may be in a row in order to express their voice. It is prescribed that parents with young children get priority.

'With every mother who comes with a child, we mark both the mother and the child,' said the chairman of a polling station. Women are kindly reminded that they should not give away their children to let others go. Such shame is more common in Kenyan elections, often accompanied by long rows and a lot of delay in polling stations.

The elections are about President Uhuru Kenyatta and his main opponent Raila Odinga. The elections are so important for many Kenyans that even transport ambulances to bed-whacked patients to polling stations.