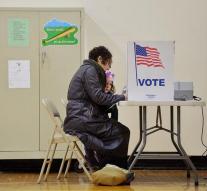 - Southern Coalition for Social Justice wants the polling stations in Durham County (North Carolina) stay open until 21:00 local time. The nonprofit organization, which is normally involved in fighting racism and other social injustice, has made the going to court.

Earlier today made failed voting machines for delay. According to the Southern Coalition has that elections in Durham 'severely disrupted'. The organization calls for an emergency regulation to keep the polling stations, 'to compensate for lost time.'

If the judge go along with that reasoning would mean that the outcome of swing state North Carolina will be announced later.