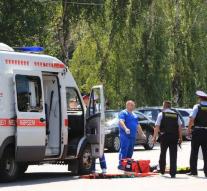 - Terrorists have policemen slain Monday in Almaty, the largest city in Kazakhstan. Russian media reported that at least three officers were shot dead and seven have been hit very severely wounded.

According to eyewitnesses has a black-clad man opened fire on officers with a machine gun.,, Religious extremism 'would stabbing behind the attack, reported news station RT.

Authorities have said in Almaty that the city is threatened by terrorism and have asked the population to stay indoors. A suspect has been arrested and another still at large, according to a statement from the Interior Ministry in the capital Astana.


Kazakhstan is almost seventy times larger than our country has 18 million inhabitants. Of which approximately 70 percent Muslim and 25 percent Christian.