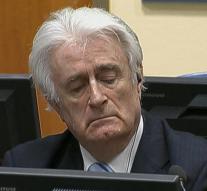 - The former Bosnian Serb leader Radovan Karadzic on Friday appealed against his sentence of forty years by the ICTY in The Hague. The tribunal sentenced him on 24 March for crimes against humanity and genocide, including the genocide in Srebrenica in July 1995, when more than 7,000 Muslim men and boys were slain.

It has notified the tribunal Friday.

Karadzic (71) was president of the so-called Serbian Republic of Bosnia and Herzegovina. He gave in that capacity include the order for ethnic cleansing. He managed to survive the war, thirteen years from the hands of justice. He was arrested on a bus in Belgrade in July 2008 and then extradited to the tribunal. His trial before the Hague Tribunal took almost eight years.