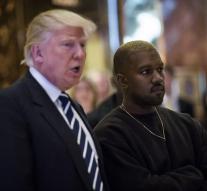 - Rapper Kanye West has in the Trump Towers in New York shook the hand of President-Elect Donald Trump. The two briefly spoke to each other in the lobby.

West arrived with a small group, but his wife Kim Kardashian was not among them. The rapper did not answer questions from the press. 'I want to just take a picture. 'It is not clear whether the meeting was scheduled.

Kanye West was recognized last month with exhaustion. He also had to cancel part of his tour. The 39-year-old rapper last November was even booed when he spoke during a concert his support for presidential candidate Donald Trump.