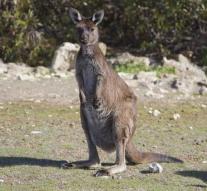 - The German city of Muenster is looking for four kangaroos. The animals escaped from their residence, probably after a fox had made a hole in the fence.

One of the kangaroos on Tuesday evening late seen but since then no trace of the quartet. Among the escaped animals is Rocky, the kangaroo who in April last year managed to escape and continued for eleven days on the run. He was eventually found and returned after an anesthetic into his cage.