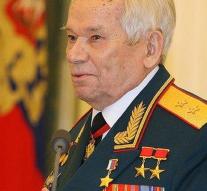 moscow - The designer of the world-renowned AK-47 automatic gun Mikhail Kalashnikov gets a 7 meter high statue revealed in Moscow on September 19th.

That reports The Moscow Times. The date coincides with the gunsmith's day in Russia and the day of Saint Michail of the Orthodox Church.

The Russian Military Historical Society has supported the installation of the Kalashnikov monument with 35 million rubles (over 450,000 euros). 'The weapons made by Kalashnikov are designed to fight evil,' says the maker of the image Salavat Tsjerbakov. 'That was his goal. '

In a letter before his death in 2013 at the head of the Russian Orthodox Church, Kalashnikov himself says that he is being pursued by the thousands of dead for whom his invention was responsible.

'My spiritual pain is unbearable,' he wrote. 'I keep asking myself the same insoluble question. If my gun robbed people of life, then it may be that I... As a Christian and orthodox believer, be responsible for their death? '