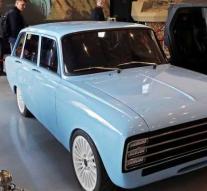 moscow - Russian Kalashnikov, world-famous for his automatic guns, has opened a new market. The company has unveiled a fleet of electric and hybrid vehicles, hoping to be able to battle with Tesla.

The most important car is the Kalashnikov CV-1. That retro supercar could go from 0 to 100 in six seconds. The battery would have a range of 350 kilometers. It is a prototype and therefore it is not yet known how much the car should cost. In addition, Kalashnikov unveiled a hybrid buggy and an electric motorcycle.

The Kalashnikov rifle is named after its inventor, General Mikhail Kalashnikov. The first Avtomat Kalashnikova was made in 1947, and therefore the weapon is also known as AK-47. That weapon was made by the machine factory Izhevsk. In 2013, it merged with a competitor and the new company was named Kalashnikov, after one of the most important export products of Russia.