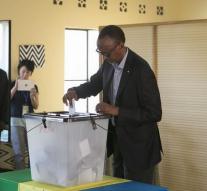 kigali - Paul Kagame secured his third term as Rwanda president on Friday. Rwandans again massively voted for 59-year-old Kagame, who made an end to the genocide in the East African country with his 1994 RPF militia, and became president for the first time in 2000.

The former rebel leader thanks his experts for stability and economic growth in the small country. The president is not undisputed. Critics accuse him of putting an end to opposition, media and freedom of expression.